Backstage at Evangeline: A “He Said/She Said” Story

Oscar’s side of the story:
This week my Mommmm and my notebook and me got to go backstage at the Confederatio n Centre.

We went in the stage door and down the stairs. We said we needed to go back stage. They told us to wait with another group of kids and my Mom thought they were a ballet class but it turned out they are the kids in the play! They play monkey in the middle at the start.

When we got inside the studio they gave us our own chairs with our names on them. I got introduced to everybody and I said HELLOOOOO!!!

The grownups are not all acting. Chris the Stage Manger sits at a table with two other people who have pens and a water bottle and a big binder and sheets of paper. One of them let me see some of the binders. Another one of them is Ted who wrote the whole show and the songs.

Annie the Director isn’t acting either. She is there to tell the people what to do. She is strict. She pays a lot of attention. Sometimes she whispers to people about how they’re supposed to do their part. She doesn’t always whisper. Sometimes she stops people because she wants them to try stuff differently. They can’t bang into each other onstage.

There was an actor who sat next to us because he wasn’t in the scene we watched. He plays an Englishman and he has a long gun called a musket because I saw a bunch of them on the floor behind me. 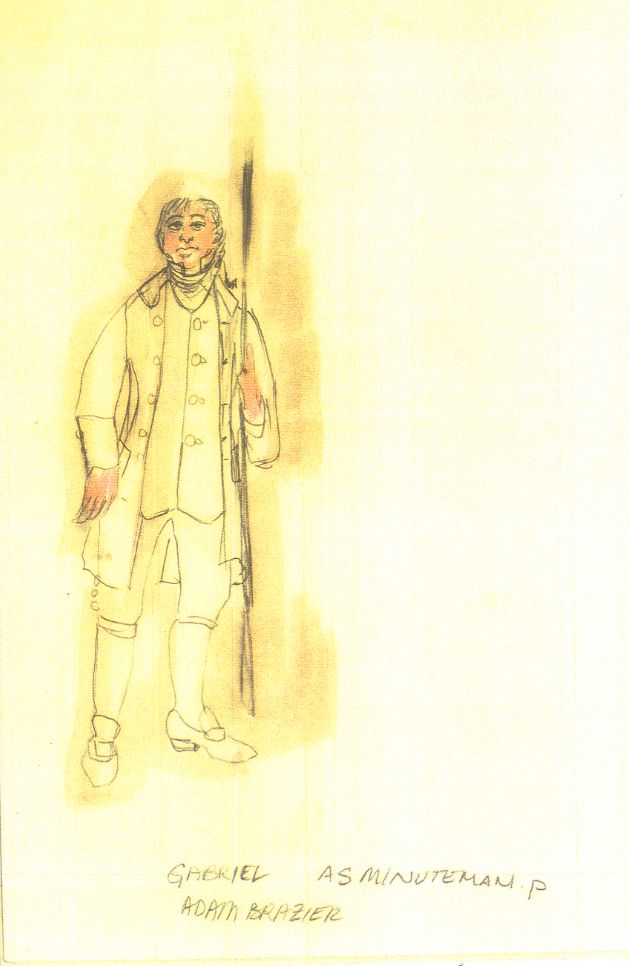 I wonder if they’re actually going to shoot something in the play? They haven’t let me see any fights yet.

Reza plays piano and plays all the songs while people sing. An actor plays a fiddle too and sings an Acadian song called “O Acadie you are my heart.”  There is also a blacksmith who sings a song called “I was born across the ocean”. I learned all the words while watching.

I asked my Mom if we knew the blacksmith, because he looked familiar. Mom told me he was the actor who played Matthew in Anne of Green Gables when I saw it last summer. I never knew that Matthew was a blacksmith! Actors have to be able to be in a million plays and do lots of things.

Sock Girl asked me if I could have one of the jobs getting ready for Evangeline, which one would I pick? I would pick an actor playing the blacksmith because I like hammers and I know his song already! Almost!!

Bonnie’s side of the story:
The fun thing about blogging the development of a brand new musical tour de force with a seven-year-old partner is the way this little face opens people up.

We’ve been welcomed, and joked with, and made to feel a part of things, to the extent that I’m not sure Oscar realizes how rare it is for somebody who’s not IN a show to get to see what we’re seeing.

And what we’re seeing is cool.

I hadn’t been backstage at Confederation Centre since I was in a Colonel Gray musical in 1989. The rehearsal studio – site of vague and slightly traumatic memories of my (very) brief ballet career at the age of five – now goes by the title of the Elizabeth Mawson Rehearsal Studio, which made me beam. Elizabeth Mawson played Marilla in Anne of Green Gables for more than three decades: I watched her nearly every summer of those years. She was the consummate Marilla, for me, and a huge part of the magic of mainstage: the grandeur of a very human story come to life.

That grandeur and humanity and magic seem pretty evident in Evangeline, already, even before the lights and the costumes help transport us all to the world of Acadie.

When you see a rehearsal, you’re not seeing a packaged product but the raw material from which it’s made. And Evangeline has some pretty amazing raw material. It’s a big cast, all ages, and when they open up their voices for the big numbers, the wall of sound makes the room ring.

They look the part too: the casting for the show feels absolutely brilliant. Chilina Kennedy, a New Brunswick native and former Anne of Green Gables, will originate the role of Evangeline. Adam Brazier, from Toronto, is Gabriel. They both shine, even in rehearsal sweatpants. The personality and camaraderie of the whole ensemble, actually, is pretty evident from the sidelines of the rehearsal studio: the lot of them would fit in quite nicely at most of the Acadian family reunions I’ve been to.

I’ve been more struck by the music than I’d expected. Like Oscar mentioned, some of the songs are catchy and keep playing in my head, over and over. Others are just plain beautiful: one duet between Gabriel & Evangeline had me in tears on first hearing and brought the rest of the cast to their feet, clapping. Gabriel then turned to Oscar and asked, “was that okay, buddy?” Oscar froze and shrugged his shoulders. Apparently we need to work on teaching our young theatre critic more overt and in-the-moment forms of, erm, appreciation.  😉

I predict a very successful CD of the music from Evangeline, if Confederation Centre chooses to release one. Seriously. You want to hear this stuff.

From where Oscar and I sit, Evangeline is shaping up to be every bit as much a cultural classic as Anne has been for nearly fifty years. Lucky Charlottetown.

Human, I think.
View all posts by oscar →
This entry was posted in Uncategorized and tagged Confederation Centre, Elizabeth Mawson, Evangeline, rehearsals. Bookmark the permalink.

7 Responses to Backstage at Evangeline: A “He Said/She Said” Story